Christian graves desecrated by Muslims at Longsight church in Manchester

I've been reading Enemy Of The State by Stephen Yaxley, a.k.a Tommy Robinson. On page 112 he claims that Muslims in Longsight, Manchester were desecrating the graves of Christians after buying St Johns church and converting it into a mosque.

Here is a link to a video to the kind of scene that would have greeted the protesters https://www.youtube.com/watch?v=v_yejeSZdwU and is also the video Tommy Robinson directed me to as his evidence - Please watch it in full.

The EDL protested against this desecration of graves, but I think Tommy Robinson was misled in order to outrage people against Muslims, and no such grave desecration took place. As this seemingly false claim is documented in his book, and therefore being spread, I am hoping to prove beyond reasonable doubt that this is an error (an honest one I think) and also hoping that Tommy will accept this and ensure the record is set straight in the form of an errata webpage for his book.

The YouTube video shows a lovely photo of  a Christian church complete with gravestones, and then the footage taken at later date shows a flattened ground with a headstone on the floor. The first thing to note is that these are not showing the same side of the building. 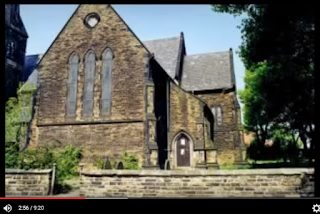 The picturesque church with graves. 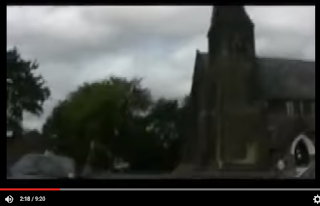 The church as seen in the video footage.

The scene of the video footage on Google Maps taken in July 2015.

One of the great things about Google Street View is that they take photos on more than one occasion. This enables us to look at a scene and then compare it to some point in the past. In this case photos were available for July 2015, and as far back as September 2008. 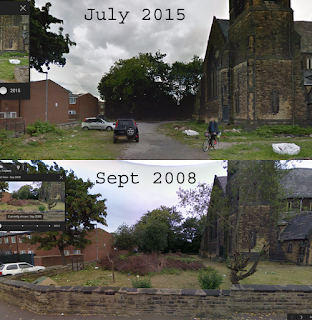 Whatever was happening in the video footage it was after September 2008. Judging from the 2008 photo there wasn't an area that was being used as a graveyard..  So what was happening? According to this local news report from The Manchester Evening News, dated 10th of September, 2009, the former garden of the church was being turned into a car park when builders discovered headstones. The report reads

It is understood the headstones, which have not been identified, were not part of the graveyard - which has not been used since 1966 - but had been moved at some point to form pathways through a church garden, before being covered over.

The discovery was of headstones previously used on graves that had been moved at some point in the past to create a path in the garden, and over time had been lost beneath the undergrowth as the garden was no longer maintained. These were not graves. The same news report reads:

Arshad Nawaz, trustee of the charity that runs the centre, stressed that no grave had been disturbed.

He said some £50,000 had been spent to repair the church, which had become dilapidated over the years. The graves and gravestones had been `carefully preserved', he added.

"As Muslims we very strongly believe in the sanctity of mankind," he said.

Note how the language switches from headstones to gravestones in this article. This is because the preserved part of the land actually had graves on it. These graves were preserved as part of the £50,000 spent restoring this Grade II listed building.


Looking through images of the site over the years using Google Earth it would appear that this area of the church has been very overgrown and neglected for a number of years before the building was restored by Muslims and used as a mosque.

Planning permission to convert the area at the side of the church into a car park was granted multiple times to different people, on the following dates


The "desecrated gravestone" image seems to have come from a news report made by the British National Party (BNP) on September 6th, 2005. The report (now deleted but archived here) reads

The bloodless genocide and ethnic cleansing of the British people and culture continues apace with the latest example being the ripping up of a century old Christian cemetery to make way for a mosque in Manchester.

The grave desecrations, being carried out with a large Komatsu earthmover in the graveyard of the St John the Apostle and Evangelist church at the corner of Holmfirth Street and St John’s Road, is part of the re-opening of this nineteenth century church as the Dar-ul-Ulum Qadria Jilania “Islamic Centre.”

Given the evidence it would seem the BNP used this discovery of a covered up pathway (which had been made out of unused headstones when the church had a garden) and then used it to spread hatred against Muslims by claiming they were tearing down the graves of Christians; the ultimate slap in the face of Christianity from Islam.  From there the EDL were stirred up with this misinformation and came to demonstrate against this seemingly sacrilegious act. Soon afterwards local Muslim graves were targeted nearby by vandals.

UP to 20 Muslim graves have been vandalised in a racially motivated attack at a south Manchester cemetery.

Staff arrived at the cemetery to find up to 20 gravestones had been deliberately pushed over, and a number had broken.

The attack is being treated as racially motivated as only Muslim graves were targeted.

The Manchester Evening Standard article explaining the story of the graveless headstones and the garden path was published within 4 days of the BNP's misinformation exercise but, unfortunately, it was the BNP story that got the attention of the EDL. It seems as though the former EDL leader was duped by Nick Griffin and The BNP, who's agenda was always to seed hatred for anyone not white.

So what did happen to the stones that were on the graves at the side of the church that was being used as a cemetery? They are still there! 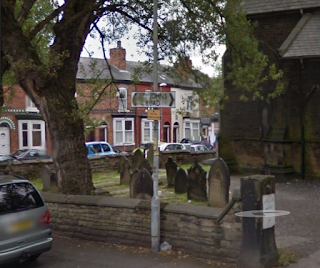 What these people actually did was spend £50,000 to preserve an abandoned church, and respect the dead.