I've let this lie for a long time now, but today I feel like it is finally time to put it to rest. Alom Shaha once tweeted a link to this article

I no longer recall the details of the article. I do remember agreeing with quite a lot of it and feeling it was important for people to read. However, I did also feel that the following comment in the article was incorrect, offensive, and certainly counter productive to the acceptance of the article by the white people it stereotyped. 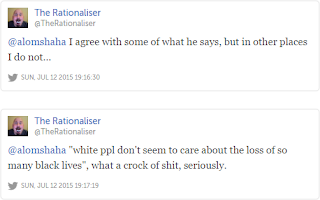 I can admit that looking at this tweet it can come across rude. I was very annoyed by this blog for being accused of inhumanity based on the colour of my skin. I don't experience problems in my day to day life because of my colour, and it was in fact Alom who helped me to spot the white privilege I have and was unaware of (thanks for that), but to accuse white people of thinking black people's lives are worthless is a horrible racial slur.

Yes, I took offence, and yes I was annoyed. I do also get annoyed when people negatively stereotype Black people, Asian people, Muslims, or anyone else; but what really got me annoyed about this blog was that it was written to complain about racism and yet a small part of it was being racist in a horrible way.

This is not the reaction I expected. I thought Alom might disagree with me, we might discuss it, and perhaps (as we did with white privilege) be fortunate enough to have one of us change our mind. I didn't expect Alom to accuse me of being racist for disagreeing with a black man for saying that white people don't care if fellow humans with black skin die. I'd have said exactly the same thing if it had been a white supremacist claiming it, in fact I'd have been more outraged because I'd have felt a white supremacist was trying to claim they represent all white people, whereas in this case I was willing to put the offensive text down to a statement of personal perception that needed wording better, or simply being mistaken.

Just do a simple search through my Twitter timeline to see what I say about black people. There are a number of Tweets where I post my outrage at how black people are disproportionately shot by white police officers in the US. In fact, primarily my Tweets are about Islam, so take a look at what I say about Muslims while you are there. I hope you will agree that I judge people based on their individual actions, and not their skin colour or even their shared beliefs.

This morning I saw that someone I follow (The physicist Jon Butterworth; worth following) had retweeted something by Alom.

*Not all Muslim patrols have ill intentions, some patrol the streets to collect litter, and others to ensure the pavements are safe for the elderly to walk on after it has snowed. This isn't actually relevant to this post, I just wanted to take the opportunity while writing this blog to point out that there are good people doing good work, even if they are Muslim patrols :)

But back to the issue at hand, After all this time I am still annoyed by the memory of Alom's racism towards me, and the horrible slur of accusing me of being racist. He often points out the racism in others, so the added factor of his hypocrisy in making such a racist statement still gets under my skin and I pointed it out.

Not only did I not expect a response at all (because I am blocked), but I certainly didn't expect to read the response given.

What on Earth does my skin colour or gender have to do with anything? If he is criticising me for how he perceives me because of my actions as an individual (the Twitter handle bit) then that's fine, but it is only white people who do this or, indeed, only white men? Why, Alom, do you push your negative statement about your perception of me personally onto all people who happen to have the same skin colour and/or gender as myself? What does your statement about my skin colour do other than prove my initial point?

*For the record, my name is (and always has been) a statement of my goal and not one of my perceived status. It is what I strive for in myself and others through rational discussion, not what I claim to be.

I don't even mind your colourful language in calling me a wanker, but must you really associate your negative perception of me with the colour of my skin? Alom, you are a trustee of The British Humanist Association for goodness's sake! 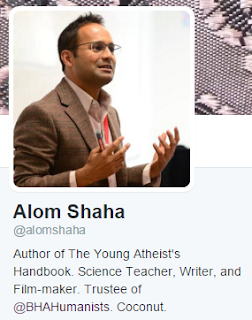 While I do think he has many valid points on white privilege, discrimination against non-whites and women, I do also think he suffers from a bad case of hypocrisy. Accusing me of objecting to an article not because it paints me as an inhumane racist as I stated, but simply because the author was black!

Alom, you helped me to identify something I found difficult to see about myself due to the life experiences I had due to my skin colour. I hope you are eventually able to see the plank of wood in your own eye. Not every white person who disagrees with one of your opinions is a racist, and to claim they are is what you claim to despise so much, racism.

*References to the tweets are held by the independent 3rd party, Storify https://storify.com/TheRationaliser/who-s-the-racist