Dawah Man, the dying baby, and 32,000 pounds unaccounted for

Here is a screenshot from a video by Imran Khan a.k.a. "DawahMan". It was posted on Facebook on November 17th, 2014. 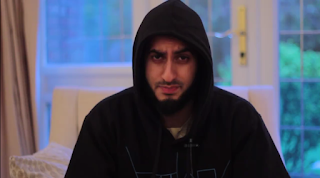 In this video he thanks his viewers for the tens of thousands of pounds they have raised for him in the past to fund various things, and then goes on to ask for more money than he has ever asked for before. He said:

Today I'm asking you guys to be generous, but with a cause that's more closer to home. From my mother's side of the family in Pakistan I have a relative whose younger child is only two years old is suffering from respiratory distress syndrome. I'm not a doctor so I don't want to go too much into the science of how it works, you can check it all out online, but basically what it means is that the oxygen isn't travelling around his body and he's...[pause]...gonna die.

On November 25th, 2014 he posted another video, again asking for more money. 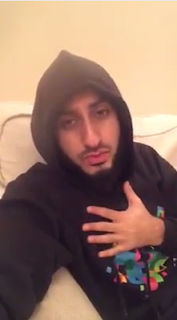 I've been fund raising for this young baby in my extended family, he's two years old and his name is Ali, and he's suffering from a lung problem...and he's actually...the doctors told him he won't survive unless he has a treatment done.


The money that has already come through I have sent it over to them and the parents, when they collected the money...erm, forgive me, rather it's been collected on their behalf by a family member

On December 1st, 2014 he posted another video, again asking for money 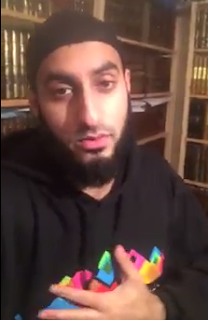 Thank you guys for all the money that has been raised for baby Adian...We have reached basically practically just under £20,000. Just a little bit more to go before we can get the full money to get his treatment over in the USA. I mean, he is in critical condition. Without the machines he is rigged up to he would die. Time is running out. 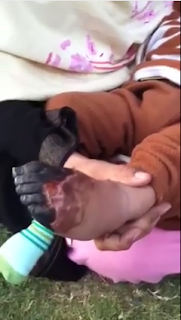 This time it was a video created by the baby's (Ali / Adian?) mother, speaking in Urdu. The English text on the post read:

The baby in my family who we have been fund raising for, this is a video from his mother showing how bad his condition is. She's speaking in urdu but she's explaining how he is deteriorating

They may have to amputate his leg if we don't get the treatment started in time. Plz plz plz be generous with your donations ... WAllahi my family is truly grateful to you all for all your love, support and most importantly Du'as

A translation of the Urdu spoken by the baby's mother is as follows:


Two of the veins in my child's brain have been damaged, he has a heart problem, he has a clot in the left [unknown] and now his chest is raising. His feet also have a [unknown] problem. Over here, in Pakistan, the doctors have given their answer, that his treatment is not possible here. I appeal that you give whatever help you can for my child's life. We'll try whatever's possible. There's also a saying in the hadith that whoever saves a life it is as though they've saved the whole of mankind.

Thanks to RazaSaab for the translation

The last screen shot I was able to capture of the fund raiser was at £30,000 just before Imran created a video (that I now cannot find) claiming the baby had to have his foot amputated and was too ill to travel to the US for his life critical life saving treatment he needs otherwise he will die. 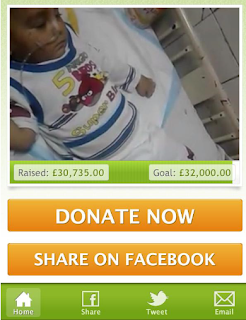 I was later informed by Imran that the full £32,000 had been raised. Unfortunately any attempts at asking Imran for an update on the baby's health has led nowhere further than empty promises of update videos, and asking him where the money is / has been spent results only in threats of legal action for libel (even though not once have I done anything other than ask for information, I have made no accusations)

May 9th: Update "next week" 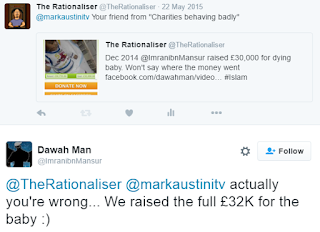 Since then Dawah Man has outright ignored the question. It's now the end of March 2016; 15 months after he finished raising the money, and 10 months after the promised update that was due "next week". Since then Imran has uploaded over 50 videos to his Facebook page.