Abdullah Al Andalusi was a guest on BBC's The Big Questions show this Sunday (15th of March 2015, Series 8 episode 10) to discuss the subject "Do British Muslims have a problem with apostates?"  He was clearly unhappy with how things went on the show and was quick to write a blog post criticising reviewing the experience.

I thought I would criticise his criticisms review his review.

I’ve just finished the BBC ‘Big Questions’ program. It was, as expected, an anti-Islam fest, attacking Muslim families for not accepting children to leave Islam (despite lots of non-Muslim families rejecting their children for BECOMING Muslim).


I think people should be free to change their minds, and that this freedom should apply to people leaving Islam and to those joining it.  I don't think a twenty minute slot is sufficient to discuss anything more than a very small picture of a complex issue, and so it obviously would not have been possible to discuss both sides of the same coin.  I would like to see a show about the problems of becoming a Muslim or perhaps even better a one hour special covering the whole phenomenon of freedom to think; people changing / joining / leaving all kinds of religions, how their families and friends reacted etc. That would be very interesting indeed .Take note Mentorn Media!

The discussion was not "attacking Muslim families for not accepting children to leave Islam", it was  about Muslim families who do not accept their children leaving Islam, this is very different.  Abdullah's wording implies the discussion is about how Muslim families act in general, rather than how some families act, or even only some members within some families.  For the sake of brevity (20 minutes) this discussion was restricted to Islam and was to discuss whether or not there is a scriptural basis for these actions, whether they are mandated or not, whether they apply in Britain, and so on.  Perhaps it was Abdullah's misunderstanding of exactly who was being discussed is the reason he felt it was an attack of Muslim families and "an anti-Islam fest"?

They gave the discussion to an Ex-Muslim ‘Amal’, whom was given the lions share of time to attack Islam and Muslims, and ample time afterwards – so much so, it almost became the ‘Amal Show’


From the quick review I've just done (which wasn't all the way through) Amal had the longest time to talk (2 mins 40 seconds) followed by Usama Hassan who explained how death for disbelief was a concept that was introduced after Muhammad's death.

Lots of people shouted over each other, which made parts of the show very frustrating, and I would say the biggest culprits of this were Amal and Kate Smurthwaite.  The person who interrupted the least was Usama Hassan followed by Muhammad Shafiq.  If the best amongst us are those with the best of manners then, in that audience at that time, the Muslims were clearly the best amongst us.

Predictably when it came to me, Nicky Campbell asked the ‘yes or no question’, about whether I believed in a ‘apostasy law’. I responded robustly that I reject the translation ‘apostasy’, and they didn’t like it – not one bit. I approached the topic from outside the box that they wanted me to stay in.


After Amal claiming the phenomenon she personally experienced is founded in Islam why is it unreasonable to ask Abdullah if that claim is true?  Nicky asked a very clear question, "When all Shariah conditions apply in a perfect Shariah state should apostasy be a criminal offence?"  At this point Abdullah could easily have said something like "If you mean for simply leaving Islam then no."

Abdullah and I have discussed this and I know that he disagrees with the killing of people who decide to stop being Muslims.  At one point he called the show an inquisition, said he was only there to talk about issues (not people), and then said he refused to say if he condones or condemns specific beliefs.  When asked about FGM Abdullah felt confident to quickly condemn it.    So why did Abdullah give up the opportunity to give his opinion on Nicky Campbell's apostasy question?

The four major Sunni schools of thought on Islamic jurisprudence all agree that one may be executed by the state for simple actions such as refusing to pray, denying the Quran, or mocking Muhammad; which is why Muhammad Shafiq's promotion in Pakistan of Maajid Nawaz being an insulter of the Prophet was so dangerous.  This was seen by people as an incitement to violence against Maajid Nawaz.  Why?  Precisely because there is a problem with apostates, something Mr Shafiq would surely have known.

Abdullah's views are far more palatable than those of the majority, but they are not the majority's view.  Abdullah's sticking point here was something called "Ijma".

Ijma is a consensus, in the case of punishment for losing one's Islamic religion the consensus of the founders of the four major schools of Sunni Islam is death.  Even denying a ruling that is the consensus of the scholars is an offence punishable by....death!  This means that even if our unnamed fictitious country heralded in a perfect Caliphate running a perfect law system based on Shariah it would still be possible to have Muslims killed for openly professing a loss of their faith in Islam, or for making their disbelief manifest in other ways such as refusing to pray.

The first point was, that the title of the ‘Big Question’ is tritely and unoriginally another attack on the Muslim community in the UK: ‘Do British Muslims have a problem with apostates?’. It serves to further fuel the demonisation of Islam and Muslims in the UK – leading to more anti-Muslim social ostracism (which they were so upset about happening to ex-muslims!).


It wasn't an attack it was criticism, and it wasn't The Muslim Community but only individuals who act in a certain way.  The show was about a specific victim group, not one about all victims of any injustice one can think of on the spur of the moment.  This was a poor show of WhatAboutery In this second attempt to rally the troops to his aid Abdullah did exactly what he was accusing others of doing, he was making an Us vs Them scenario where the victims side of the argument is every Muslim in the UK.

The second point I made was that it was anti-Muslim and disingenuous to discuss Islamic State law and connect it to the issue of Britain. 0 ex-Muslims have been killed in the UK, that’s right 0 – so how does this relate to so-called death penalties claimed of Islamic law?


Abdullah seems to be claiming that as long as nobody is killed we shouldn't openly discuss the fact that there is a group of people who others believe should be killed.  The discussion was about British Muslims' opinions about apostates, not how many apostates have been killed in the UK.  Ostracisation from one's family, being spat at, beaten up, are these not problems worthy of discussion?

In fact Abdullah is wrong.  This news article from 1989 tells the story of a Muslim man in Birmingham, UK, who killed his daughter for apostatising and becoming a Jehovah's Witness.  It says...

Malik had threatened several days earlier to kill his daughter unless she returned to Islam...She refused his demands to acknowledge Allah, so he deliberately killed her as he said he would


Is it okay to discuss attitudes towards Muslim apostates now, or is this somehow irrelevant because it's only one case and was over 25 years ago? Is it anti-Muslim to mention this, or should I get credit for noting that the murderer's wife and sister opposed his actions and tried to calm the situation down by getting the victim to placate her father? Which part of this event can we discuss without it being anti-Muslim?  Nobody is saying Muslims are killing apostates left, right, and centre, we are asking if this denigrating attitudes towards apostates is based in Islam, and whether or not we can do something to solve it.

I can't help but wonder how many murders for un-Islamic behaviour have been classified as "Honour Killings"?

The points I made were valid, but I was accused of being ‘slippery’ and avoiding answering the question. NO


Abdullah, you did avoid the question! You resorted to accusing the show of victimising Muslims in general, and diverting to the subject to one of accurate translation rather than addressing the social affect.  Death for apostasy is the majority view, you cannot deny this fact, and you cannot pretend you didn't know it without losing credibility as a Muslim debater.  When Abdullah first wrote his review on Facebook I added two comments, one linking to my blog on the jurists' rulings for apostasy and another asking him to discuss it with me.  He deleted the comment which linked to the evidence.

If you really are willing to answer the question then that's great.  Here it is: 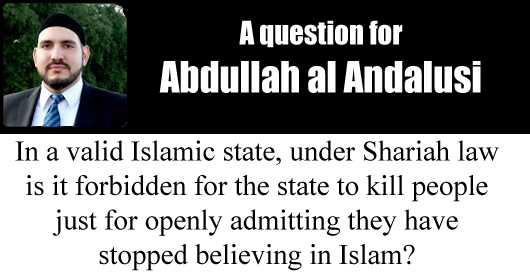 The factual answer is "No", it is legal for the state to kill these people.  If you would like to explain why you disagree with the majority position then please blog about it, convince others, that's what many people want.  To change something, you first have to admit it needs changing.

UPDATE: The Big Questions posted these statistics on March 18th