I was on Twitter this morning and saw a link to this video reporting to show an Palestinian civilian being killed by an Israeli sniper as he lay injured on the floor.

I watched it through a few times, trying to understand exactly what was happening. I found some parts difficult to understand so I decided to download the video. By capturing screen shots and overlaying them in Photoshop I was satisfied that there were no continuity errors or anything like that in the scenery. I watched the video frame by frame and there is at least one continuity error, very likely caused by the editing, and what seems to be an inaccuracy in the description.

The video is running at 25 frames per second. The time format shown is A:BB:CC where A = Minutes, BB = Seconds, and CC is a frame number from 0 to 24 denoting which of the 25 frames is being displayed at the current Minute/Second. Each frame lasts 1/25th of a second, which is 40 milliseconds. 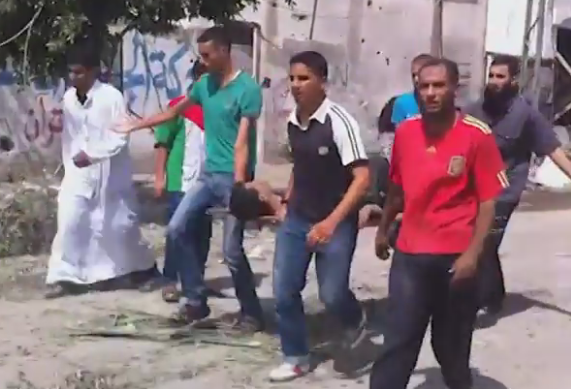 At 0:24:09 we see the future victim in the green t-shirt for the first time, he is helping to carry a man on a stretcher. If you look closely you can see the coloured stripes at the hem of his t-shirt's sleeves. 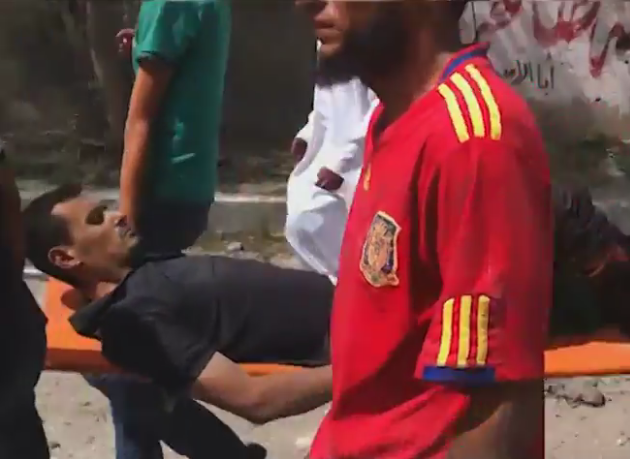 0:27:08 The man on the stretcher appears to have a nasty injury to his lower right leg. 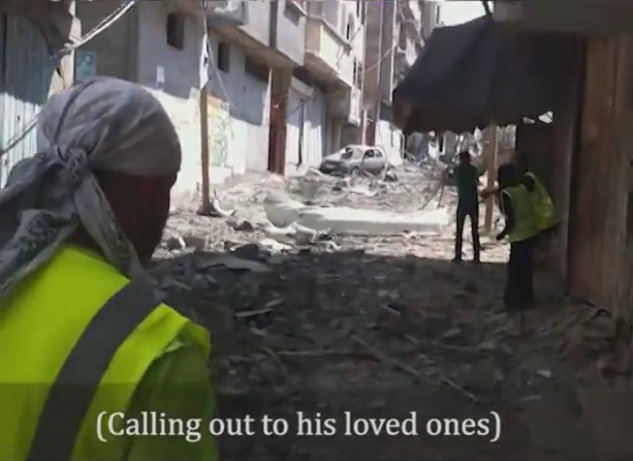 0:36:20 The victim is seen ahead of the cameraman, calling out to someone he is searching for. In the foreground we see a man with a white bandanna on, the other male aid worker has a dark sleeved top on beneath his high visibility jacket. 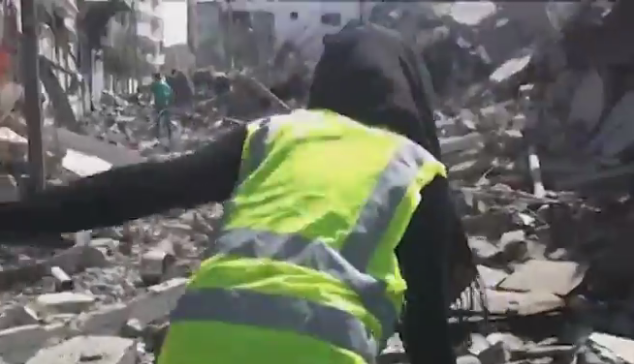 0:48:19 The victim is seen in the distance, leading the way up the street over the rubble. 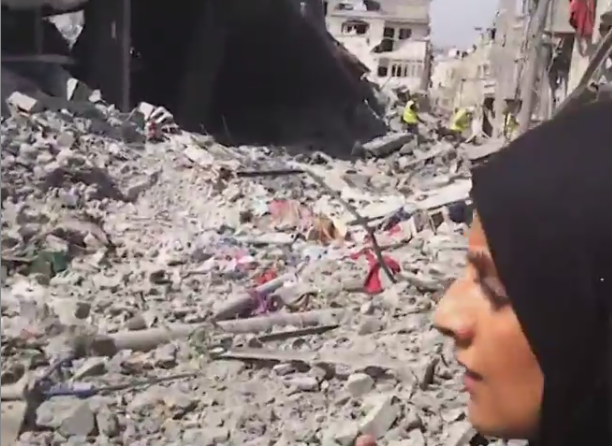 1:49:19 The aid workers are now quite some distance away, it is possible to make out the white bandanna of one of the workers and the dark sleeved top of the other. 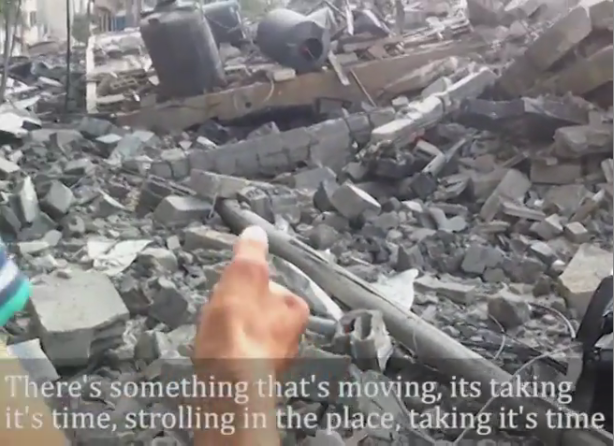 2:13:01 The video footage is continuous between 1:49:19 (above) and this point in time. The cameraman does not move between those two points so we know how far away the aid workers are, it also shows the victim is within an arm's reach of the cameraman. 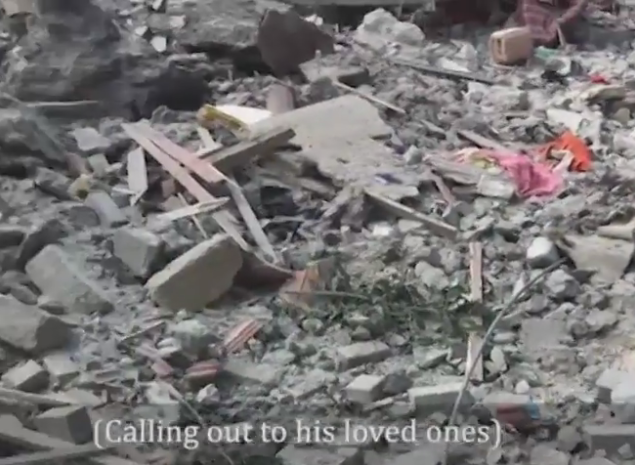 2:22:17 Two shots are heard. Still the cameraman has not moved along the road. At 2:23:07 The cameraman reacts to the shots, this time 0.6 seconds so again within reason. 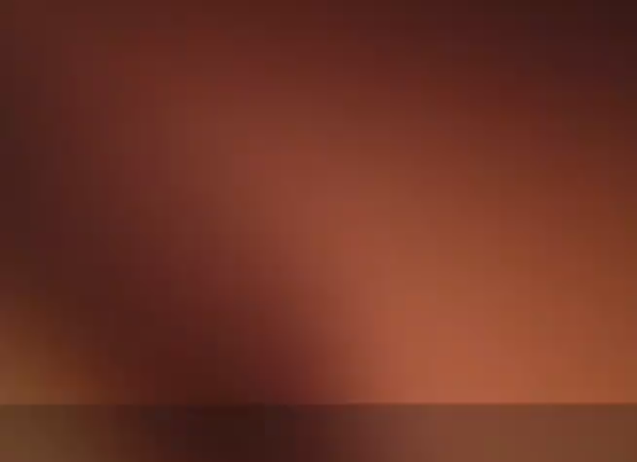 2:23:19 Confusion ensues and the camera's view is covered by close contact with the victim, movement of the phone filming the sky for a split second, and eventually what looks like flesh (pictured). 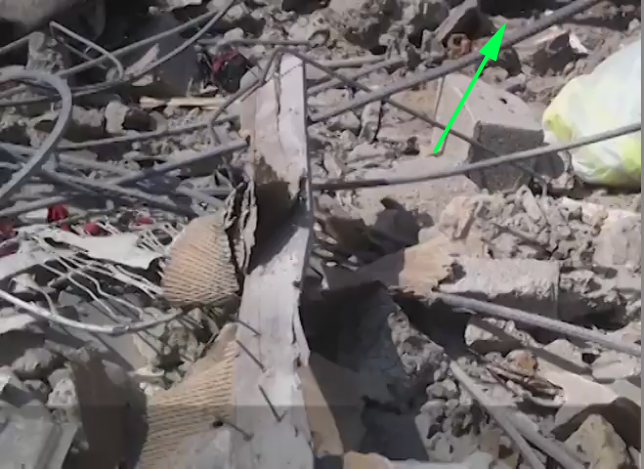 2:24:17 The next frame is as displayed above. The green arrow is indicating the position of a shadow from the victim's leg. 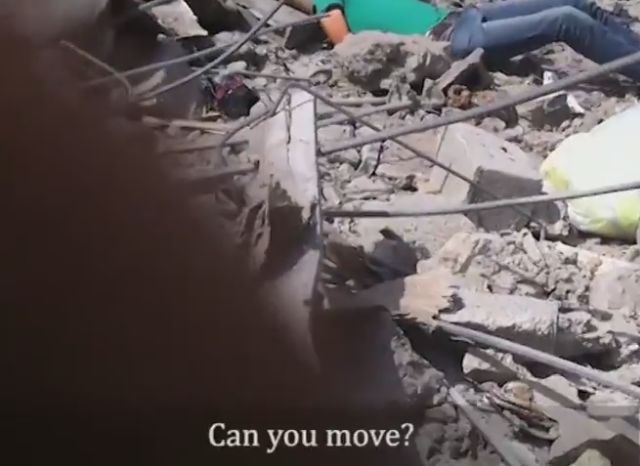 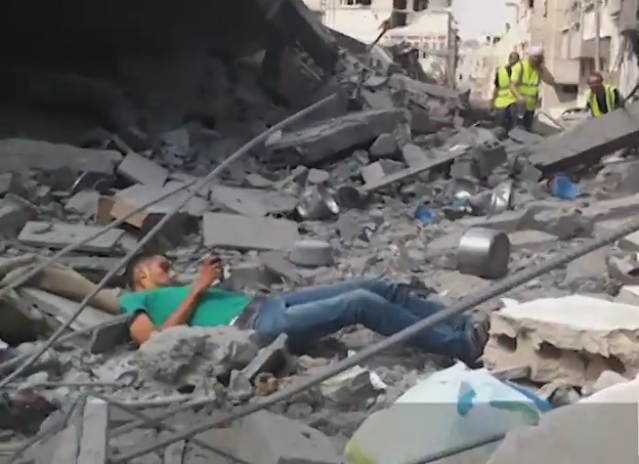 2:30:03 The victim can now be clearly seen to be much closer to the aid workers. He is lying down and appears to be sending a text on his mobile phone. 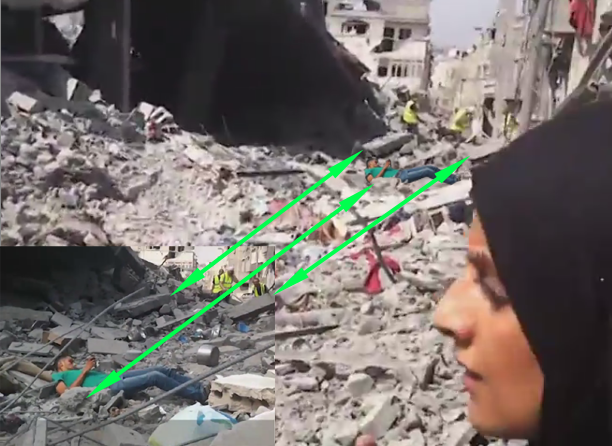 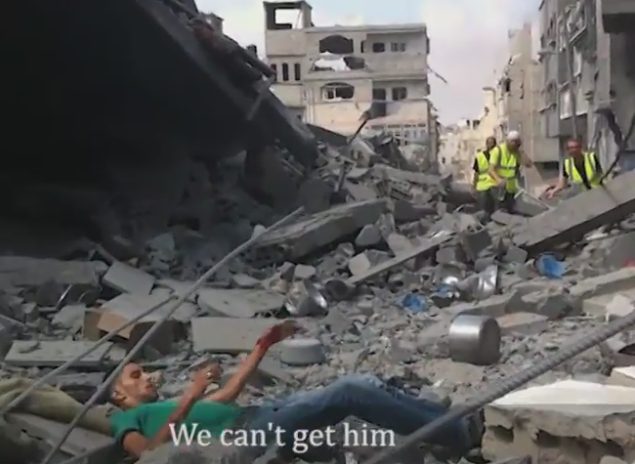 2:33:20 The victim is seen raising his left arm to show an injury to his hand/wrist.

The same arrangement appears at 2:13:01 where the victim was the furthest along the street away from the aid workers.

At 2:22:17 The two shots are heard. The arrangement is still the same, with the victim being the furthest of the three away from the aid workers.

According to this Wiki page the Israeli army uses the following rifles
The speed of sound at sea level is 340 m/s, to travel faster than this the elevation of the scene would have to be below sea level or be very cold. This means that the rifle with the lowest muzzle velocity fires bullets at 1.79 times the speed of sound.

The first gun shot we hear after the victim is on the ground is at 2:37:11. The cameraman reacts to the sound 160 milliseconds later at 2:37:15 and the last we see the victim upright is 1 second after the gunshot at 2:37:18.  A high velocity rifle shooting someone would cause a visual impact, especially with the bullet entering a body with a thin t-shirt on, yet we do not see one.

I can only conclude from this that the 2nd shot did not hit the victim, how is that incorrect? 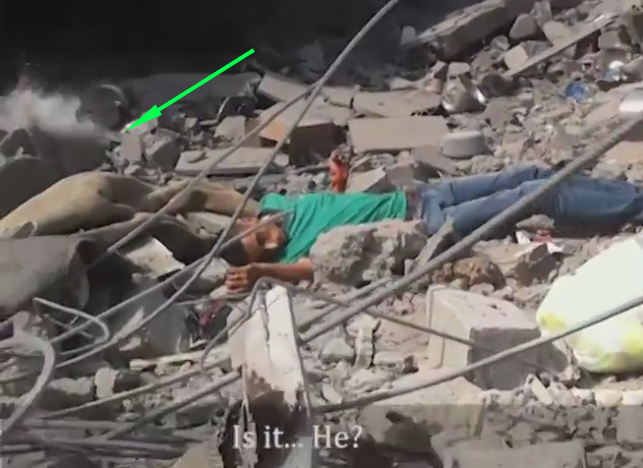 At 2:54:11 the third shot is heard. The shot misses the victim and hits a rock behind him, as seen in the picture by the dust rising from the shot.

The visual effects of the bullet are seen at the same time as the shot is heard, indicating the shooter is very close, corroborating the claim above that we should have seen an impact wound from the 2nd gunshot if the victim had been hit. Even assuming this is a different shooter the point in Question 2 still stands by its own merits.

The question that arises here is, why do the publishers of the video claim the victim was shot 3 times when the final shot clearly misses?

The worst case scenario I can see here is the following:
It is clear that someone (I will assume an Israeli) was trying to kill a wounded non-combatant as he lay on the floor. This alone is disgusting, I hope it is not the case that this event has not been misrepresented (3 hits + death) as a propaganda tool. At the same time I sincerely hope the victim in his video is alive and well.

Perhaps there are some points I am missing? In which case I would certainly like to read them so that I can understand the events more clearly. It is for this reason I would like to ask ISM Palestine to release the full unedited video so that the events occurring in the gaps can be understood properly.