Who and what exactly is Mo Ansar?

If you are reading this then you are probably already familiar with Mo Ansar. Having seen this Islamic supercelebrity on TV so often you might have the feeling you know him so well, but do you?  There is much more to Mo Ansar than his robes and scarf, just as there was more to Martin Luther King Jr than him being a man who was interested in African-American relations.

There is much we already know about Mo Ansar, he was born and bred in Watford as the grandson of a World War 2 veteran. He is a soft southerner who received a grammar education.  Mo Ansar's grandparents were all Indian, making him a British Pakistani.  Easily spotted at 6 feet tall and wearing a scarf and robes, this parent of six children is a Muslim who accepts Buddha, a cat person, and a PADI qualified scuba diver. 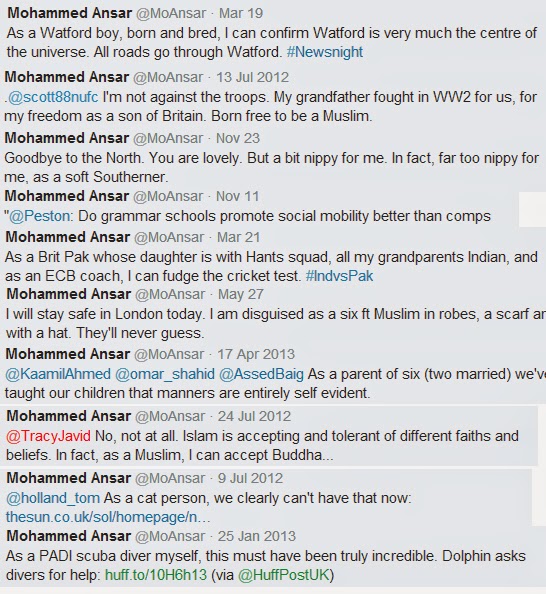 A life in politics

Mr Ansar, or as his friends like to call him "Mo" has appeared on TV and radio many times in his expert capacity as someone who happens to be both a Muslim and member of an ethnic minority; putting his neck on the line in a cut-throat world of being a social and political commentator.  He is a critical friend to the Liberal Democrat Party and is a moderate voice among already moderate Muslims.  He has been criticised (possibly only by himself) as being too moderate. 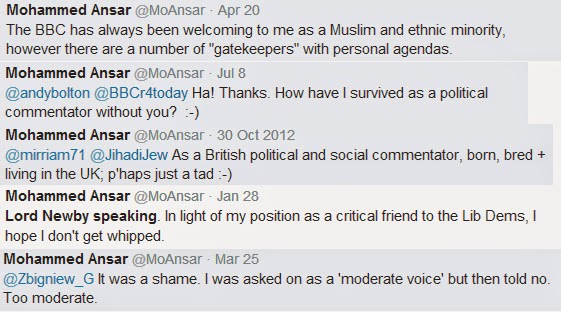 A man of diversity

Mo is a true champion of diversity.  As a diversity specialist he has been promoted to the position of Head of Diversity for an organisation in the South. A true visionary in diversity, he was further promoted to the position of diversity director.  His work in education with faith groups and non faith groups alike was bound to get his skills noticed by government officials and he soon found himself as the "New diversity practictioner" in parliament. A role most people probably didn't even know existed at the time, including parliament! 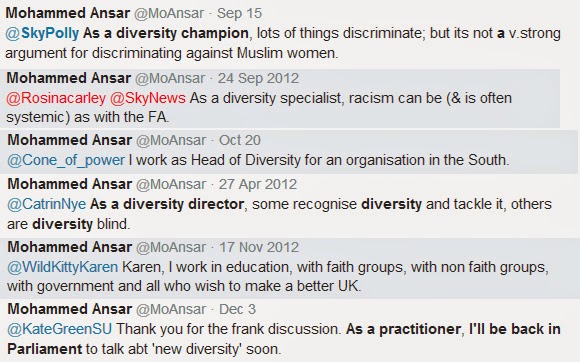 Over the years Mo has proven himself time and time again to be not only an studious academic, but one with a sharp sceptical mind which he uses to think about things.  He is a lecturer in the subjects of
and spends his time working with philosophy students. 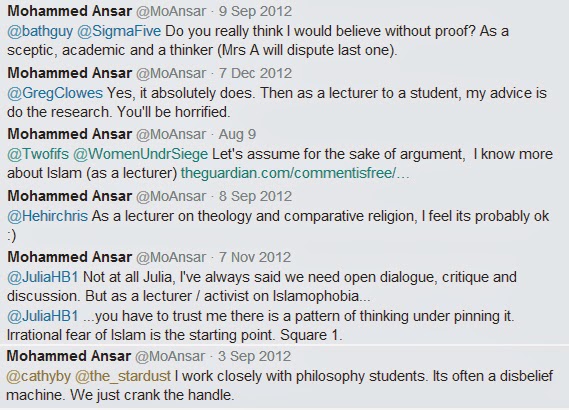 As a civil rights activist, Mo is obviously also a civil rights advocate but did you know that his work in the field of Islamophobia has caused the resignation of an undisclosed number of unnamed leaders of unnamed far right organisations? As far back as 1997 Mo had already started his 15 year preemptive fight against Islamophobia, 4 years before anyone had even heard the name Usama Bin Ladin, and back when most people thought a pilgrimage to Mecca was going to play bingo with a group of elderly female friends. 5 years before that Mo started his work as an anti discrimination diversity leader, a position he has held for 20 years at the time of writing. 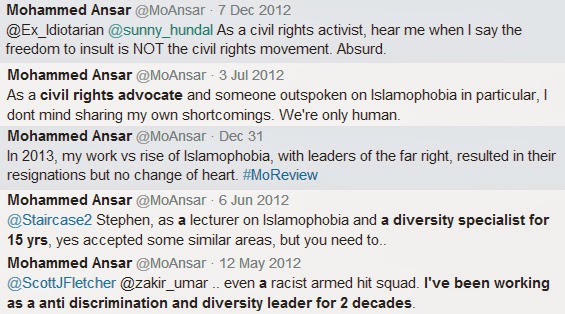 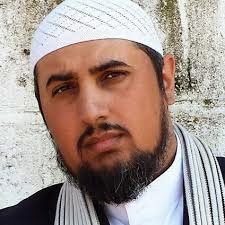 Mo Ansar: The Martin Luther King Jr of our time.

Mo hasn't only been a prominent activist in areas which affect him personally. Mo, who isn't a woman, has been a women's rights activist for over 20 years, he has supported women's groups & refuges for 20 years, he works on Lesbian/Gay/Bi/Transexual rights and also works with a charity for trans-gender people.

Mo is not only a public figure of sorts, but also a real-life public figure.  He is a school governor, a mediator, and a marriage counsellor and adviser.  He is an avid public sector worker, working with schools, parents and local government, and works with bishops and a number of local police constabularies. 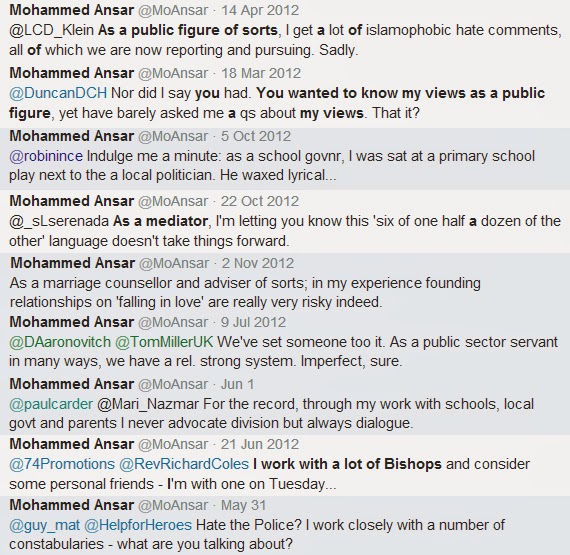 Mo's versatility is astounding.  When looking through his life history it is difficult to find something he has not done.  He truly is a Polymath of professionalism.  Of course we all know Mo for his contribution to TV and radio broadcasts but few know that secretly he is also a broadcaster, but, as modest as he is, he has never credited himself on any of his broadcasts.

He has been a professional interfaither and friend to Muslims for many years.  Not only is he an advocate of legal things but he is also a jurist and a lawyer.  You might be forgiven for thinking he is just a lawyer with a bank account, but be clear on this, he is in fact a banking lawyer. 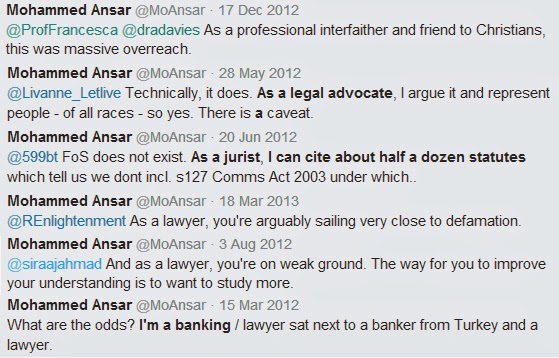 Mo has a diverse experience of work. In addition to advocating legal banking, Mo works with the Muslim Council of Britain and and most significant organisation in contemporary society - The Muslim Civil Rights Crisis.

He is very sparse with his details of his work as a communications specialist and we can only speculate as to why, perhaps because it crosses over with his work with the UK Central Prosecution Service?

For Mo though life is not all about how the law affects lesbians, homosexuals, bi-sexuals, transexuals and bankers, he also likes to share his awesome scope of knowledge with the world by spending time educating young children and adults alike.

Seeing the inherent problem of children in the UK having NO education he has taken it upon himself to educate children from key stage 1 through to key stage 5, that's a truly diverse age range of 5 through to 18 years of age.

Beyond this Mo is a university lecturer, a lecturer on Newtonian physics, a scientist who is well read on evolution, and a lecturer on pre-holocaust 1930's Germany.

He also works as a chaplain at a 6th form college and university, and is an ex-scout troop leader.

There are rumours that he might be moving from Newtonian physics into Quantum physics.  The following statement has been suggested by some (i.e. me) to indicate that he is trying to blend Quantum physics with law. 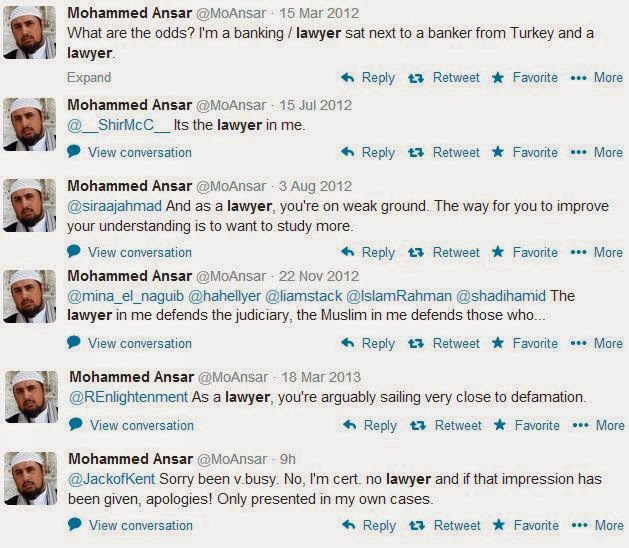 Being both a lawyer and not a lawyer at the same time is an impressive feat. Mo truly is the Schrödinger's cat of law!

A rare glimpse behind the veil

Despite his amazing work, Mo is a very private man who doesn't like to discuss himself.  In these few rare statements he has revealed a little about Mo the mere human.  He is a rationalist, a man of his word, and importantly a man who stands for transparency and FULL disclosure (his emphasis), which is how we know he isn't just making all this up.

And despite working for civil rights and equality for many years...

There really is nothing that can be said to add to this or to summarise it so I shall leave the last words to the man himself.

Mohammed Ansar
This is your life!